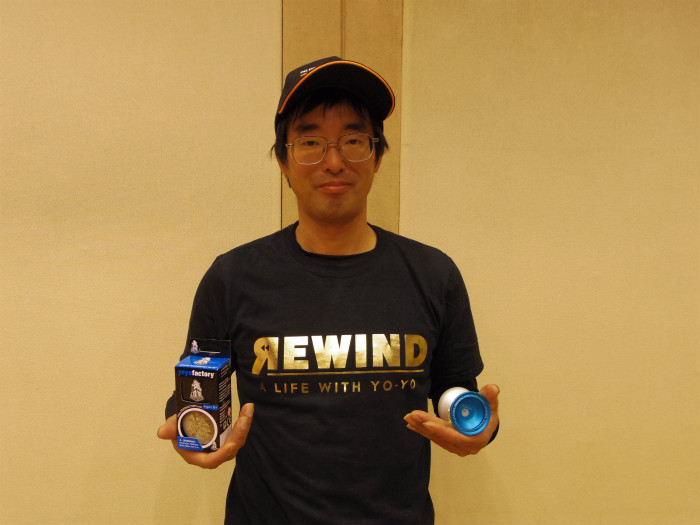 Minoru Arai, one of the Special Award winners in our REWIND “Over 40” Video Contest, competed in 1A at the 2015 West Japan Regional Yo-Yo Contest (WJ)!

His freestyle video is now online so come check it out!

His nickname is “Arapon.” He entered the video contest as Minoru Arai (Arapon).

In the past, he has competed before at WJ, and since he’s from Okayama, at the Chu-Shikoku Yo-Yo Contest (CSYC) that takes place every year in Okayama Prefecture (called Okayama Yo-Yo Contest in the past).

For this year’s WJ freestyle, he executed his tricks carefully and deliberately, and we were impressed with his apparent focus on the stage.

We look forward to seeing him again at the next WJ and CSYC contests!

If you didn’t already see his winning video, it had a totally different approach from the other entries. In it, he interacts with people on his travels by introducing them to yo-yo. It is a beautiful idea and, quite frankly, we were touched with the results. It’s definitely worth seeing again so we highly recommend giving it a watch.